Central Asia is the core region of the Asian continent and stretches from the Caspian Sea in the west to China in the east and from Afghanistan in the south to Russia in the north. It is also sometimes referred to as Middle Asia, and, colloquially, "the 'stans" (as the five countries generally considered to be within the region all have names ending with the Persian suffix "-stan", meaning "land of") and is within the scope of the wider Eurasian continent.

In modern contexts, all definitions of Central Asia include these five republics of the former Soviet Union: Kazakhstan (pop. 16.6 million), Kyrgyzstan(5.5 million), Tajikistan (7.6 million),  Turkmenistan (5.1 million), and Uzbekistan (29.5 million), for a total population of 64.7 million as of 2012. Other areas sometimes included are Afghanistan, Mongolia, eastern Iran, and northwestern Pakistan, and sometimes Xinjiang and Tibet in western China, the Kashmir region of northern India and northern Pakistan, and southern Siberia in southern Russia.

Despite this uncertainty in defining borders, it does have some important overall characteristics. For one, Central Asia has historically been closely tied to its nomadic peoples and the Silk Road. As a result, it has acted as a crossroads for the movement of people, goods, and ideas between Europe, West Asia, South Asia, and East Asia. 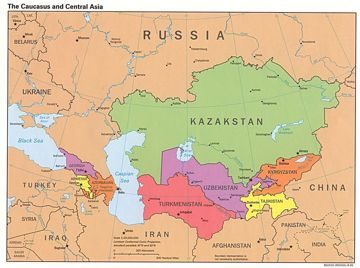