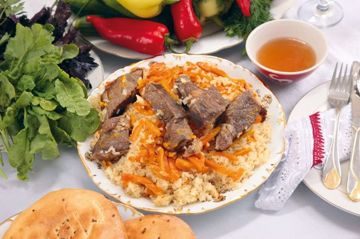 As in every culture of the world, the culinary traditions of the Turkmen people - is the result of two interrelated factors: geographic location and history of the people. Ethnic cuisine has evolved over more than one millennium. During this time it has absorbed the traditions of many neighboring peoples and it generously shared with others the experiences and findings, exchanged culinary secrets of the craft. But, taking the new Turkmen cuisine has remained true to itself - many of its traditions created yet almost at the dawn of humanity scrupulously revered to this day.

One of the main features of the Turkmenistan cuisine is simplicity and affordability in terms of both products choice and cooking methods.

The most popular dish in Turkmenistan is pilav. It is cooked from lamb, carrots, rice and onions. Shurpa is another widespread dish - mutton broth with potatoes and tomatoes.

Turkmen have a special attitude toward bread. Cooking national bread - chorek - there is an art in itself. Tandyr (a clay oven) where chorek is baked is considered the most sacred place in a house and chorek itself has been always honored as a protecting charm.

Turkmen national cuisine has a lot in common with cuisines of other Central Asian countries, Uzbek and Karakalpak in particular. However, it differs from them in a number of features. It is mainly distinguished by a variety of fish dishes owing to the country's proximity to the Caspian Sea.

Moreover, Turkmen perfectly adapted to cooking of fish traditional Asian vegetable products - sesame, rice, dried apricots, raisins and pomegranate juice. The result is a bizarre mix of giving new pleasant and unexpected taste effects thanks to the elaborate proportions of the main ingredients and skillful combination of spices and fat. 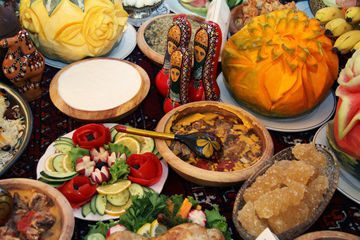 Dishes made of wheat enjoy popularity in the Turkmen kitchen. Ancient ritual dish is called “semeni”. It is prepared from plantlets of wheat seed and flour on the day of vernal equinox, during the celebration of Novruz. An essential attribute of mass celebrations and ritual meal is porridge of wheat cereals called “yarma” in meat broth - delicious moment! Gourmets will also appreciate ravioli “borek” prepared with with minced meat or eggs and herbs inside.

Another common type of ancient grain products - fried in boiling oil, diamond-shaped or rectangular pieces of unleavened dough – “bogursak” or “pishme”. The name “bogursak” associated with the name of the legendary Bugra Khan. According to legend, the soldiers were hungry and asked the marshal, “What are we going to eat?” Bugra Khan took some dough, mixes it in his hand and threw it into a cauldron of boiling oil. And since that time, this dish is named after him.