Culture, handicrafts and tourism are rapidly becoming inseparable partners. Local crafts are important elements of culture, and people travel to see and experience other cultures, traditions and ways of living. Crafts products form an important element of the purchases made by tourists, providing an important economic input to the local economy.

The arts and crafts of Uzbekistan have enjoyed well-earned fame for centuries. The pre-eminence of applied arts can be attributed to historical conditions, such as the emergence of urban oasis and a bourgeoisie who had the means to beautify their homes, shaping the cultural development of the Uzbek people. Uzbeks have developed their technical and artistic traditions over centuries. The applied art traditions over centuries. The applied art reflects everyday life; its main attribute is the close connection between artistic creativity and daily material necessity.

The social nature of decorative art lies in its collectivity. Art is the heritage of many generations; it represents a series of consecutive layers, which reflect people’s culture through the ages. The skills and knowledge imparted by various ethnic groups that eventually came together to constitute the Uzbek nation created this diversity of artistic traditions that is the distinguishing feature in works of art of all genres.

The production of papier mache and lacquer painting on papier mache thrived in Samarkand at the beginning of the 15th century, after the introduction of the art of paper making, testified by sets of genuine ornamental papier mache medallions found miraculously preserved inside of the Gur-Emir mausoleum and the Bibi - Khanym mosque. Of special interest if the completely restored golden – blue dome in the interior of the main hall of Gur – Emir, composed of 998 papier mache elements, of which 112 are original and have since been the object of painstaking restoration. There are reasonable grounds for conjecture that is was Samarkand artists who introduced this skill to North India in the 15th century, where it has developed and is nowadays flourishing. Papier mache articles: pencil – boxes of various sizes, expensive book – covers, chess, caskets, boxes of different sorts, vases and other small items, were decorated with miniature vegetative patterns. Inscriptions were often incorporated into the ornamentation on pencil – boxes. The paint was applied with thin brushes on a base made of gold or bronze powder, sheet gold and bronze on an apricot and cherry glue. The preparation of lacquers and colors for papier mache was and still is a sophisticated and highly skilled process. 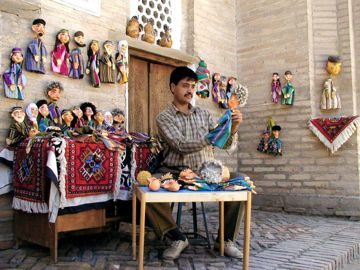 Manufacturing of dolls is one of the particularly lost and revived arts. In recent history, theatrical presentations of dolls were the favorite entertainment of both villages and town drewllers. The doll master of Bukhara study a history of a Bukhara costume, use traditional technology of tailoring, embroidery, and the Bukhara karakul fur. 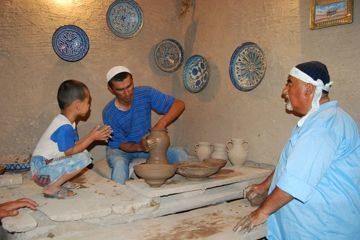 From the numerous genres of applied arts in Uzbekistan, the decorative ceramic stands out. The first samples found in the Republic by archaeologists date back to antiquity. Throughout the ages the unique expressiveness and restrained elegance of the best of Uzbek ceramics have revealed the genuine creative genius of the nation.

There dishes, lyagans, spherical cups, pialas, kyosas, vases, jugs, pots, and large and small khums, convenient for use and at the same time, refined in form. Pottery and ceramics have held an eminent role in the culture of the region and still are coveted items for visitors to bring back home. The works are distinguished by skilled workmanship, beauty of form, enchanting ornaments, richly imaginative designs and a deep sense of the harmony of colour. There are two kinds of decorative ceramics in Uzbekistan: baked terracotta and slip glaze ceramics. The last 100-150 years has seen ceramic centres with their distinct style establishing themselves in Uzbekistan: Ghizhduvan, Shakhrisabz, Samarkand, Tashkent, Rishtan and Khorezm. Over the last few decades, the works of ceramics of Gurumsarai, Denau and Chimbai in Kara – Kalpakstan have also gained popularity.

The ceramics produced in these centers may be differentiated by their two colour groups: blue – white – green  and green – brown – yellow. This is mostly due to technical reasons. In the Fergana valley and Khorezm, where the alkaline glaze ishkor is used, blue- white – green paintings are predominant, because yellow and red colours decompose under the ishkor glaza, whereas the blue and green colours give a set of fine bright and gentle tints. In the areas where lead glaze is used as in Samarkand, Bukhara and  Tashkent, all shades of the yellow – red – brown spectrum are very popular. The ceramic paintings in these districts are defined by their deep, glowing colour range, and at the same time their surprisingly delicate beauty.

The art of jewelry making in Uzbekistan has its long traditions. From the century to century zargar masters have created unique jewelry items. In the second half of the 20th century jewelry became an industrial product, which resulted to some unification of jewelry items, a granule simplification and distortion of traditional forms of ornaments, and the refusal of some kinds of technology.

A less prominent though important branch of metal – working in Uzbekistan is the art of knife – making. The knives are highly sharpened and kept in leather sheaths decorated with metallic plates, embroidery, appliqué or painting. Such knives are called ghuldor pichok, meaning “elegant, decorated knife”. The forms are various. The blades differ according to where they are made: narrow or wide, straight or curved, as do the shafts; single – piece or composite, wooden or bone, encrusted or painted. Of the ancient centers of artistic knife – making remain Chust in the Fergana valley, Khiva and the well known black smiths in Bukhara.

Fabric design in Uzbekistan is an outstanding example of folk art. The past and present are wonderfully combined – the traditions of the ancient folk art interwoven with the knowledge and understanding of modern  times. The art decorative fabric acts as a kind of the history book, reflecting its centuries – old development, and embodying the creative work of many thousands of talented masters and weavers. In the second half of the 19th century, in many cities and settlements (Marghilan, Namangan, Bukhara, Andizhan, Samarkand, Kitab, Gizhduvan, Urghut and Besharyk) miscellaneous plain and patterned hand – made cotton, silk, half – silk fabricsof simple and complex texture were designed and produced, what we refer to as ikat nowadays. These textiles were turned into items of clothing and interior decoration. Thick cotton and silk, nap velvet – bkhmal, moiré rep – adras, bekasab, and banoras, the finest and lishtest silk shawls kalgai, rustling and scintillating shorkhs – kanauses; specific to the area are the satined yakruya and khan – atlases of contrasting colours; Fergana and Samarkand coverlets with their misty patterns were particularly famous. The ornamentation on hese fabrics consisted primarily of stripes and geometric shapes, notes for thir indistinct, fuzzy outlines. This technique in Central Asia is called abrbandi, and the fabrics abr. 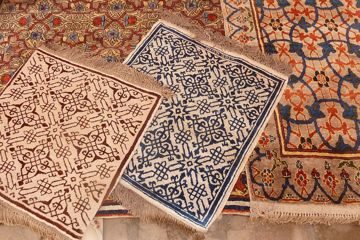 Now manufacturing of carpets in Uzbekistan develops in 3 directions: homemade, state and private companies. Carpet masters produce all kinds of carpets in these provinces. Old classical Uzbek and Turkmen carpets are used as main samples in carpet making. Main tasks of carpet-makers include the restoration of ancient drawings, creation of new good quality products, and above all, - restoration of technology of traditional dying of natural fabric. Long use of aniline dyes had its negative effect upon aesthetic qualities of the homemade carpets with further turning them to an ordinary household item.