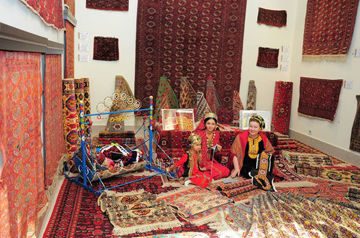 Turkmen culture has a multi-millenary history. National art developed on the basis of creative genius of the people, continuity of traditions of professional masters of architecture and sculpture, artisans: jewelers, potters, blacksmiths, weavers, builders, carpenters, etc.

Like a colorful carpet fabric woven from the patterns of national creativity, inspiration and imagination, modern national culture has absorbed the best of the rich historical, literary, musical and artistic heritage, folklore and crafts, customs and traditions, rituals and not being confined on the well-established, traditional, absorbed a lot of positive changes and trends of world culture.

On the territory of Turkmenistan there are over two thousand historical and cultural objects, which are the material embodiment of people's memory of significant, triumphant, joyful and sorrowful pages of the fate of the nation.

Specific open-air museums are also the territory of ancient settlements - Old Nisa, Kunya Urgench, Atamyrat, Ancient Dehistan, Old Sarakhs, Abiverd and Geoktepe fortress. All of them have become a place of cultural pilgrimage for many tourists and scientists from around the world. 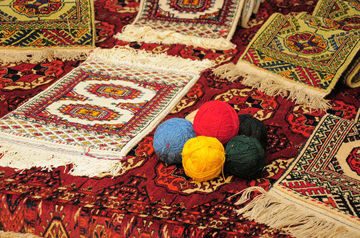 Turkmen carpet - is probably the most common and ancient "brand" of national traditions.

Dozens types of carpets were used in everyday life. The main carpet in the house was like a passport - it has been encrypted with the history of the tribe, clan, and family. Each of its sign is not just a graphic image, but also a complex drawing, which embodies the myths and legends about the creation of the universe and of man and his relationship with the world.

Turkmen carpets ornament is a creative matrix of turkmen art. The basis of carpet ornaments - eight-pointed star, formed from two squares. Such a star adorned the banner of the great founder Oguz Khan and the Great Seljuks. Now it frames our National Emblem and the standard of the President, and is also one of the favorite ornaments of architecture erected in our white-marble capital.

In a sign of admiration for the skillful turkmen carpet, since 1992, Turkmenistan established the Turkmen Carpet Day, which is celebrated on the last Sunday of May. In 1994 the Turkmen Carpet Museum was opened in Ashgabat. Nowadays the Museum moved to a new palace building, it turned into a real treasury of folk art. In August 2001 the World Association of Connoisseurs of Turkmen hand carpets was founded, bringing together domestic and foreign manufacturers of Turkmen carpets, businessmen and entrepreneurs, owners of private collections, experts and scholars of turkmen carpet weaving. 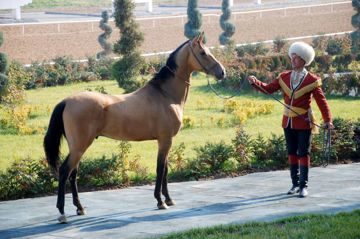 The entire multi-millennial history of the Turkmen people is inseparably linked to the quick Ahal-Teke horses. These horses, referred to by the ancient chroniclers as “heavenly” were close to our ancestors in days of joy and celebration, and in the difficult hours of dire need.

Here is the saying of the ancient Turkmen epic “Gerogly” facing the racer: “On the day of the fight, companion of a horseman, I prayed not an heir, I prayed for you, my brother, my comrade”. For the brave defender of his native land Gerogly his faithful friend horse Gyrat had no price. What a heartfelt words he says about it: “If there was a man who wanted to buy you the cost of his soul, and that the price would be cheap for you”.

The fame of the unsurpassed dignities of the Ahal-Teke horses has spread far beyond the Turkmen land. And exactly Ahal-Teke horses have rightly become a symbol of the new era of history of the Turkmen people. Picture of magnificent Yanardag - breed champion - adorned with the coat of arms of Turkmenistan, which by the way incidentally was an extraordinary event in the heraldic practice, which is usually used only stylized images of animals.

Ahal-Teke horses regularly participate in tournaments abroad, where win prestigious prizes. In 2012, the Turkmen jockey school debuted in major European races for the prize of “Triumphal Arch” (“Arc de Triomphe”) held in the outskirts of the French capital.

With the unchangeable triumph the equestrian group “Galkinish” performes at the World Festival of Circus Art. 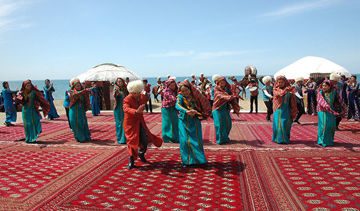 The dance originated in ancient times for which there are a lot of historical and archaeological evidence, as well as historical information drawn from ancient written sources. Scenes of a lively dance “kushtdepti” in particular, elaborately inlaid on the surface of the ancient rhytons Old Nisa.

Surprisingly fresh and vivid description of the scene of rousing dance of Turkmen horsemen, executed on lavish celebrations to mark the arrival in Baghdad of the Great Seljuk ruler of the empire - the glorious Togrul Beg (1055). Scientist-historian Abu al-Faraj John Gregory bar Ebreyin in his writings describes the scene: “There were beautiful folk melodies and songs, and then the Turkmen horsemen, all as one, bowed first one and then the other knee, began to perform amazing harmonious dance that soon moved to the fascinating by strength and perception of action, accompanied sharpened leaps, dizzying turns and incredible plasticity”.

Russian traveler S.A. Gunaropulo, who visited Turkmenistan in 1871 as a part of Russian expedition in his work “In the Turkmen plains” left the following memories: “At the end of festivities villagers took us off to the ship. Along the way, many of them joined in the singing of our soldiers, and then began to perform amazing throat singing consonant turning into rhythmic dancing”.

The name is associated with the obligatory ritual “at the last moment” of the dance where performers under the final chords of throat singing “gazal” three times stamp down their foot, loudly repeating: “Kusht, Kusht, Kusht–Depti”.

Dimensional movement in a circle of people with raised hands resembles an ordered movement of the planets of the solar system, committing eternal circles under the laws of the universe.

In the early days “Kushtdepdi” - one of the brightest, entertainment traditions of national holidays, was especially popular among Turkmens, who inhabited the coast of the Caspian Sea. Later it spread throughout the territory of Turkmenistan, acquiring the characteristics of performance in different regions of the country. Now, this dance has become an integral part of every festival which is so rich in the generous Turkmen land.